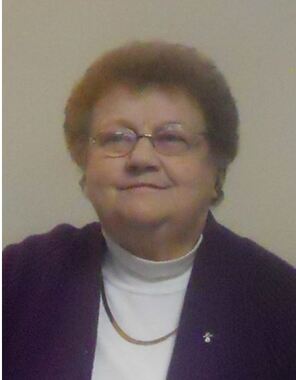 Back to Ada's story

Ada Kay Van Maanen was born December 3, 1941, to Dick and Martha (De Kraai) Van Wyk, in Rose Hill, Iowa. She passed away on January 29, 2020, at the Mercy Hospital in Des Moines.
Ada grew up in the Monroe area, attended country school north of New Sharon, Monroe Elementary School and was a graduate of Pella Christian High School. After high school, she worked for the Pella Overall Factory until she was married.
On May 16, 1963, she was united in marriage to Gilbert Van Maanen at the Calvary Christian Reformed Church in Pella. To this union four children were born.
Ada was a homemaker and stay-at-home wife while her children were young, and went on to work for the Lynnville Café for nearly 20 years. She was a Diamond Trail columnist for over 35 years, and she was a dietary supervisor for Hilltop Manor for 15 years.
Ada was a life-long follower of Christ and a member of the First Reformed Church in Sully where she was a faithful member of Sunday School.
She dearly loved her grandchildren and all her family.
Those left to cherish her memory are her husband Gilbert, and their children and their families: Verlan and Cathy Van Maanen, Carla Van Maanen, Carol and Scott Torra, and Terry Van Maanen; ten grandchildren and seven great grandchildren. She is also survived by her siblings: Bernard (LaVonne) Van Wyk of Sully, Donald (Lucille) Van Wyk of Pella, Dick (Linda) Van Wyk of Monroe, Harold (Twyla) Van Wyk of Monroe, and Ruby Van Wyk of Sully; her sisters-in-law and brothers-in-law: Walton (Violet) Van Maanen of Lynnville, LeRoy (Ruth) Van Maanen of Lynnville, Arlene (Arnout) Dunnick of Barnes City, Dorothy Van Maanen of Grinnell, Marilyn Van Maanen of Newton, Dennis (Linda) Van Maanen of Kellogg,Shirley (Melvin) Uitermarkt of Leighton, Karen (Frank) Van Soelen of Sully, Rodney (Beverly) Van Maanen of Lynnville, and Dale (Ruth) Van Maanen of Lynnville.
Ada Kay was preceded in death by her parents Dick and Martha Van Wyk, her parents-in-law Teunis and Rika Van Maanen, and sister Jane Ann Van Wyk, and brothers-in-law: Marvin Van Maanen, Norman Van Maanen, Irvin Gene Van Maanen who died in infancy, and Ralph J. Van Wyk.
Funeral services were held on February 3, 2020, at the First Reformed Church in Sully. Memorials may be given to the Bible League International or Lynnville Historical Society. The Garden Chapel Funeral Home was in charge of arrangements.
Published on February 3, 2020
To send flowers to the family of Ada Kay Van Maanen, please visit Tribute Store.

Send flowers
in memory of Ada

A place to share condolences and memories.
The guestbook expires on May 03, 2020.