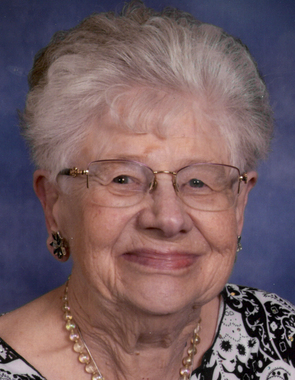 Back to Angeline's story

Angeline Ruth, the daughter of Dick and Josie (Van Haaften) Groenendyk was born February 5, 1921, on a farm near Tracy, Iowa. She attended Tracy Consolidated Schools and made her profession of faith at the Tracy Christian Reformed Church in December 1940.
On September 8, 1943, she was united in marriage with Delos Paul VanDenBerg and to this union were born two daughters, Carolyn Joyce and Cathy Jo. After Angie's sister, Mary Ann Roozeboom, died in 1956, they became legal guardians of six of her children: Marjorie, Martha Faye, Gary, Beverly, Arlene, and Patricia.
Delos and Angie farmed in the Otley and Pella, Iowa area until they retired and moved to their home at 312 Pine Street, Pella in 1982.
Angie worked very hard to provide home cooked breakfast, coffee time, dinner and supper for her husband and children. She sewed clothes for all the girls and herself so was always busy. Angie spent many hours doing volunteer work for COC, Central College, Pella Regional Health Center, Fair Haven and Hospice of Pella. She taught Family night, Friendship Bible, Sunday School and was a member of Circle and Guild of Third Reformed Church. Greatly impacting her spiritual journey were Lay Witness Missions, Cursillo and her special Bible study and prayer groups.
She loved gardening, flowers, needlework and travel. She knitted, crocheted and quilted items for all her children, grandchildren and great- grandchildren.
Angie was blessed to travel to 47 states including Alaska and Hawaii. She traveled to 12 countries and even went to Africa at the age of 82. In 2019, at the age of 98, she was still able to enjoy the Iowa State Fair for the Century Farm ceremony.
Angie later moved to Vriendschap Village and eventually Groningen, The Cottages. Just days before her death, Angie chose to make her final journey at the Comfort House in Pella where she passed away January 23, 2020, surrounded by her family who she prayed for by name daily.
She is survived by her children and their families:
Carolyn and Anton Hol of Pella;
Cathy and Michael Veenstra of Pella;
Marge and Loren Steenhoek of Pella;
Martha Faye and Robert Verschuure of Pella;
Gary and Georgana Roozeboom of Knoxville, IA;
Beverly and John Wisse of Pella;
Arlene Bogaards of Pella;
Patricia and Darrell De Nooy of Pella.
Angie leaves one sister-in-law, Lucille (Elmer) Groenendyk and three brothers-in-law: Rev. John VanDenBerg, Arie Boot, Paul Vos and Marilyn.
Angie was preceded in death by her husband, Delos (Uncle Bill) VanDenBerg in 2003; a son-in-law, Larry Menninga; granddaughter, Kristin Tighe and great- grandson, Peyton Tighe; her parents, Dick and Josie Groenendyk; sister, Mary Ann Roozeboom, brother, Elmer Groenendyk; her parents-in-law, Joe and Alpha (Den Hartog) VanDenBerg; and her beloved "VanDenBerg" in-laws: Junella and Lester VanHaaften, Wilma and Neal De Ronde, Johanna and Melvin Vos, Marjorie Vos, Josie and Howard Gosselink, Alveretta Boot and Rosie VanDenBerg.
Funeral services were held on Monday, January 27, at the Third Reformed Church in Pella. Memorials may be given for The Cottages activity program. Van Dyk -Duven Funeral Home was in charge of arrangements.
Published on January 27, 2020
To send flowers to the family of Angeline VanDenBerg, please visit Tribute Store.

Send flowers
in memory of Angeline

A place to share condolences and memories.
The guestbook expires on April 26, 2020.