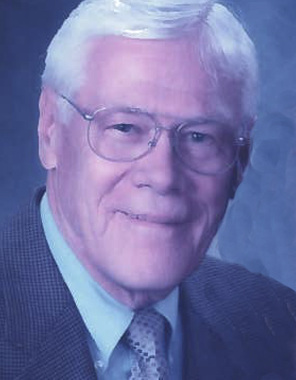 Back to Dick's story

Dick H. Ver Heul passed away on January 5, at Iowa Methodist Hospital. He was born to Dick and Jeanette Ver Heul on January 26, 1934, in Pella, Iowa.
He attended Pella grade schools and graduated from Pella High School in 1952. He then attended Central College. After one year he enlisted in the U.S. Army. He was at Fort Leonard Wood for 14 months, then 10 months in Korea. He married Mary Ringelestein in December of 1955. They had four children: Richard, Jeffrey, Gregory, and Julie. Dick attended Central College for one more semester, then moved to Brookings, South Dakota, where he got his B.S. in mechanical engineering.
They moved to Racine, Wisconsin, where Dick was employed at J. I. Case for seven years. They attended the Christian Reformed Church in Racine. The family then moved to Waterloo, Iowa, where Dick took a job at John Deere. He worked for John Deere for almost 30 years.
Dick served as deacon and elder at the Christian Reformed Church in Cedar Falls, Iowa. He also served on Building and Grounds for several years.
Dick enjoyed bowling and bridge. He loved to play bingo and enjoyed walking and fitness in his later years. He loved watching the Green Bay Packers and the Iowa State Cyclones.
Dick is survived by his beloved wife Mary, of 64 years, his son Jeff (Mary Jo) in Austin, Texas, their children Victoria (Jason), Alexander (Rachel), Alanna (Max), and Paige (Ben); son Greg (Ann) in Viborg, South Dakota, their children: John (Becky), and Ross (Courtney); and daughter Julie (Mike) McGrory in Muscatine, and their children: Alexa (Kevin), Matthew, Molly and Olivia; and ten great grandchildren. Dick is also survived by his twin sister Arvena Van Wyk, and his sister-in-law Wilma Ver Heul.
He was preceded in death by a son, Richard, his parents, his brother Jean, and sisters Mary Ann, Joyce and Aberlene.
Funeral services were held on January 10, at the Garden Chapel Funeral Home. Memorials may be given to Memorial Sloan Kettering Cancer Center or In Touch Ministries.
Published on January 6, 2020
To send flowers to the family of Dick Ver Heul, please visit Tribute Store.

Send flowers
in memory of Dick