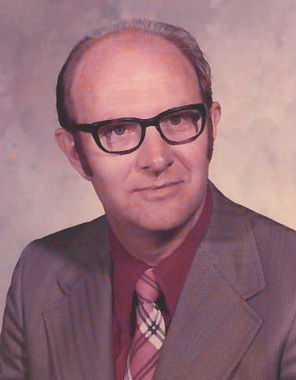 Back to Donald's story

Donald J. Baker was born to Sheldon J. Baker and Leona M. (Winter) Baker at home in Sutherland, Iowa, on April 27, 1930. He passed away on February 3, 2020, at Hospice of Pella Comfort House at the age of 89. He attended Sutherland School until the family moved to Estherville where he completed high school. While still in high school, he enlisted in the local National Guard. Following high school he worked in Humboldt, Iowa, until the National Guard was federalized to active duty in 1950. Prior to reporting for duty, he and Shirley Fairman married and she joined him in a rural apartment in Tomah, Wisconsin.
When his enlistment ended, the couple, with their new baby daughter Sheryl, returned to Estherville in 1952. After three years working in Estherville, Don elected to pursue more education and enrolled at Buena Vista College and the family with their son, James, moved to Storm Lake. Three years and a new BA degree later the family moved to Des Moines and a job at the Des Moines Register and a job selling advertising.
Tired of city life, the next year they moved to Madrid to begin his career in education. While living and teaching in Madrid, he attended Drake University to earn an MSEd in school administration. The family moved to Pella, with their new son, Randy, to accept the position of Principal at Pella Junior High.
After serving as principal for eight years in Pella, Don accepted a consultant position with the newly forming computer service organization serving schools through-out primarily central and northwest Iowa. He served there until retiring in 1994.
In retirements he served two terms on the Pella Public Library Board, spent much time volunteering for Lions Club, and other organizations. Don is a charter member of the Pella Lions Club and a 50+ year member of the Monroe Methodist Church. He and Shirley enjoyed spending 17 winters on the beach front in Port Aransas, Texas, and especially spending time at our home and enjoying our two grandsons. He is survived by his son Randall, and wife Susan, and grandsons Ryan (Melody) and Brandon (Whitney). He was preceded in death by his son James, daughter Sheryl, son-in-law Joel, parents and grandparents.
Funeral services were held on February 7, at the United Methodist Church in Monroe. Memorials may be given to Monroe United Methodist Church or Hospice of Pella. The Garden Chapel Funeral Home was in charge of arrangements.
Published on February 7, 2020
To send flowers to the family of Donald Baker, please visit Tribute Store.

Send flowers
in memory of Donald

A place to share condolences and memories.
The guestbook expires on May 07, 2020.