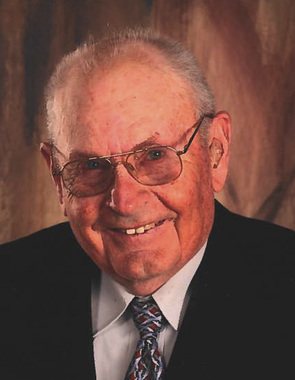 Back to Gerald's story

Gerald Henry Hoekstra was born August 28, 1930, to Henry and Jennie (Klein) Hoekstra, at Leighton, Iowa.
Gerald attended Centennial Country School, and earned his GED while overseas in the Army. He was drafted in the Army on August 20, 1952, earned the rank of PFC, and was honorably discharged on July 30, 1954.
On July 8, 1957, he was united in marriage to Ruby Mathes in the First Christian Reformed Church in Pella. To this union they were blessed with four children: Daniel Wayne, Ronald Gene, John Henry, and Cindy Rose.
Gerald was a farmer, drove school bus for Pella Community Schools, and was a truck driver.
Gerald really enjoyed history. He liked visiting Pioneer Village in Minden, Nebraska, where he would take his time carefully reading each word on each plaque.
Gerald also visited the Mississippi River each year with the family to watch the barges go through the locks at Rock Island.
Gerald is survived by his wife Ruby, their children and their families: Dan Hoekstra, Ronald Hoekstra, John and Kelly Hoekstra
Cindy and Dave Gritters; five grandchildren and two great grandchildren. He is also survived by his sister Mary Lou and Henry Rozenboom of Johnston, Iowa.
Gerald was preceded in death by his parents Henry and Jennie Hoekstra, his parents-in-law Layton and Henrietta Mathes, his sisters: Alma and Elmer Dykstra, and Gertrude and Bill Van Zee.
Funeral services were held on January 15, at Connect Church in Pella. Memorials may be given to Pella Christian High School. The Garden Chapel Funeral Home was in charge of arrangements.
Published on January 13, 2020
To send flowers to the family of Gerald Hoekstra, please visit Tribute Store.

Send flowers
in memory of Gerald

A place to share condolences and memories.
The guestbook expires on April 12, 2020.