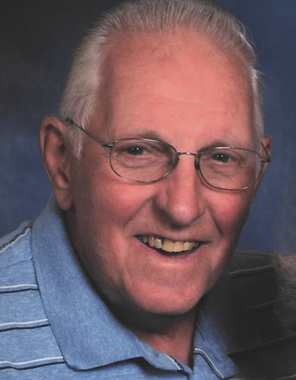 Back to Harry L.'s story

Harry Lee Hartgers was born on December 29, 1935, to Tunis and Cora (Olsthoorn) Hartgers north of Sully, Iowa.
On October 11, 1957, he was united in marriage to Marlene Terpstra at the Third Reformed Church in Pella. To this union they were blessed with three children: Debra, Danny and Diane.
Harry worked for Midwest Manufacturing in Kellogg, Iowa for five years and at Pella Corporation for 38 years. He also worked for lots of farmers, and he started his own stone business. His favorite hobby was raising red worms. He went on Red Rock Threshers and WHO tractor rides. He enjoyed going to toy auctions, and lawn and garden tractor auctions. He went to Pella basketball games and Vet's Auditorium for many years. Harry also loved camping, helping his kids and grandkids with 4-H, and attending all his grandkids' activities. He enjoyed playing pitch on Sunday nights with family.
Those left to cherish Harry's memory are his wife Marlene and their family: Debra and William Halpin of Vista, California, Danny and Vicky Hartgers of Montezuma, and Diane and Brian Van Vark of Pella; eight grandchildren, and four great grandchildren. He is also survived by his siblings: Anna Mae and Arvin Van Wyk, Vernon and Marge Hartgers, LaDonna Rooda, and Barb Hartgers.
Harry was preceded in death by: his parents; parents-in-law; and his brothers: Melvin Hartgers and Lewis Hartgers.
Funeral services were held on December 27, at the Third Reformed Church. Memorials may be given to Camp Creation or Hospice of Pella. The Garden Chapel Funeral Home was in charge of arrangements.
Published on December 24, 2019
To plant a tree in memory of Harry L. Hartgers, please visit Tribute Store.

Plant a tree in memory
of Harry L.

A place to share condolences and memories.
The guestbook expires on March 23, 2020.

Daniel Zickel
Sorry about Harry. Prayers to the Family.
Daniel Zi
View all