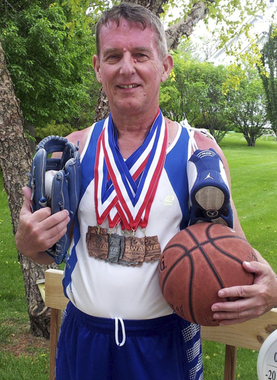 Back to Martin's story

Martin Daniel Feeney, 71, beloved husband, father and professor, died January 3, 2020. His family will celebrate his life on Saturday, January 11, 2020, with a visitation from 9:30 a.m. to 12:00 p.m. at Hamilton's on Westown Parkway, 3601 Westown Parkway in West Des Moines, and the memorial service later that day at 2:00 p.m. at Faith Lutheran Church, 10395 University Ave., in Clive.
Marty was born on March 10, 1948 to Pearl (LaFontaine) and Robert E. Feeney in Boston, MA. He graduated from Boston College High School and received his bachelor's degree in communication and theatre studies from Boston College. He then joined the U.S. Navy and served in the submarine service on The George C. Marshall Polaris Missile Sub during the Vietnam War.
Marty returned to school and earned his Master's and PhD in communication and media studies from Bowling Green State University in Ohio with his ambitious dissertation on the art of rhetorical criticism in film, rock music, and the novel.
Over the course of his decades-long teaching career at Monmouth College (Monmouth, IL), Central College (Pella, IA), and Simpson College (Indianola, IA), Marty gave thousands of students the joys of lively classroom discussions, Letterman-style top-10 lists, and his famous mason jars filled with Hershey bars to reward great work.
He filled his life outside of work with many other passions. Marty was a lifelong athlete and runner; he won 104 medals at the Iowa Senior Olympics and was a gold medalist in the 2009 Governor's Cup race in Des Moines, IA. He directed over 20 plays and as a young student, he won the New England Drama Association's "Best Play" award for his co-authored play titled "18th Noel."
Marty above all was a devoted husband and father adored by his family. This brilliant, dedicated, caring and compassionate man will be greatly missed by his wife of 35 years, Susan Eggert; children, Rob (Caitlin) Feeney and Caroline (Tim Crawford) Feeney; his sister, Pearlan (Otto Grater) Feeney-Grater; grandson, Nolan Charles Feeney; his nieces and nephew; and his students. Marty was preceded in death by his parents.
Memorials may be directed to the Speech and Debate Program at Simpson College, 701 North C. Street, Indianola, IA 50125. Condolences may be expressed at www.HamiltonsFuneralHome.com.
Published on January 6, 2020
To send flowers to the family of Martin Feeney, please visit Tribute Store.

Send flowers
in memory of Martin