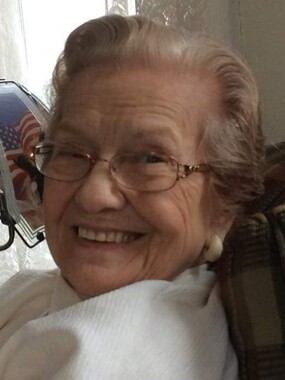 Back to Mary's story

Mary Bernhart Lacy Bogaards, known by many as Bernie, age 90, of Grinnell, died on Thursday, January 16, 2020 at Grinnell Health Care Center.
Mass of the Resurrection will be held at 10:30 am, Tuesday, January 21, 2020 at St. Mary Catholic Church in Grinnell with Fr. Ross Epping, pastor of St. Mary Catholic Church, officiating. A reception will follow the mass at the church. Interment will follow at Hazelwood Cemetery in Grinnell.
Visitation will begin at 2:00 pm on Monday, January 20th at the Smith Funeral Home in Grinnell and her family will receive friends from 4:00 pm until 7:00 pm.
Memorials may be designated to St. Mary Catholic Church and mailed in care of the Smith Funeral Home, PO Box 368, Grinnell, Iowa 50112. Memories and condolences may be shared with her family online at www.smithfh.com.
Mary Bernhart Kelly was born on April 28, 1928 in Grinnell, Iowa, the daughter of Charles and Elizabeth (Simmon) Kelly. She attended Grinnell Community schools.
On November 28, 1947, Bernie was united in marriage to William "Ted" Lacy in Montezuma. The couple made their home in Grinnell, where they raised seven children. Ted passed away in 1983. Bernie was married to Howard Bogaards of Pella on August 14, 1998 in Montezuma. The couple resided in Pella for 18 years. Following Howard's death in 2016, Bernie returned to Grinnell. She was a long-time parishioner of St. Mary Catholic Church in Grinnell.
Bernie dearly loved her family, especially her grandchildren, and held a strong faith in the Lord, Jesus Christ. Her enjoyments were going to dances, playing cards, visiting with friends and family, watching old movies, and traveling. She will be remembered for being feisty, for allowing her grandchildren to eat dessert before dinner, and for the strong love of her family.
Bernie is survived by her seven children, Ronald (Deb) Lacy of Des Moines, Iowa, Christine (Bill) Gregor of Sioux Falls, South Dakota, Elizabeth (Richard) McGee of Grinnell, William (Deb) Lacy of Newton, Iowa, Randall (Connie) Lacy of Grinnell, Gary (Linda) Lacy of Grinnell, and Michelle Lacy of Estherville, Iowa; 15 grandchildren, Tammy Dudley, Stacy Ellis, Donald Ellis, Richard McGee, Cheri Chedester, Marcia (Richard) Lehman, Casie McGee, Jeniffer Padgett, Angela Lacy, Amber Oswalt, Brandee Lacy, Jessica (Todd) Brown, John (Aubrey) Lacy, Michael Cole, and Matthew Sadler; 41 great grandchildren; two great great grandchildren; and sister-in-law, Ruth Kelly of Newton.
She was preceded in death by her parents; two husbands; four brothers, George, Raymond, Joe, and Jerry Kelly; and two sisters, Evelyn Kellenberger and Dorothy Wheeler; and one grandson, Russell Lacy and two great grandchildren, Patricia Ellis Beal and Braelyn Sadler.
Published on January 21, 2020
To plant a tree in memory of Mary Bogaards, please visit Tribute Store.

Plant a tree in memory
of Mary

A place to share condolences and memories.
The guestbook expires on April 20, 2020.