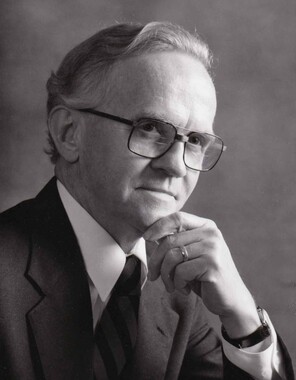 Back to Ned's story

Ned Arthur Hedrick was born on July 31, 1923 at Knoxville, Iowa, the son of Arthur and Inez (Core) Hedrick. He was baptized at the First United Methodist Church in Knoxville, where he was a member until joining the Second Reformed Church in Pella, Iowa, where he later served as a Deacon and an Elder.
Following graduation from Knoxville High School, Ned attended Central College in Pella before serving with the U.S. Army beginning in March, 1943. For three years Ned was stationed in California, Texas, Hawaii, Okinawa, the Philippines, and Japan during World War II until his discharge in February, 1946. On June 1, 1944, he was united in marriage with Vivian Joy Hackert of Pella at Saint John's Episcopal Church in Del Monte, California. They lived in Pacific Grove, California and Brownwood, Texas until he was sent overseas. Joy then returned to Pella to complete her education at Central College and received her Bachelor of Arts Degree, Cume Laude, in June, 1946. When his tour of duty with the U.S. Army ended, the Hedricks moved to Iowa City, Iowa where Joy worked in the Veteran's Service Office. Ned worked part time with the Daily Iowan Newspaper while completing his college education at the University of Iowa. After graduation, Ned and Joy returned to Pella and were soon blessed with three children: Ned Arthur, Jr., Carol Sue, and John Ellis. The Rolscreen Company, now known as Pella Corporation, hired Ned in 1948. During his 37 year career with the company, he held positions as Advertising Manager, Regional Sales Manager, General Sales Manager, and Senior Vice President. He was a member of Pella Corporation's Board of Directors for 12 years prior to retiring in 1986. Ned did return briefly, however, as Project Manager for the construction of a new manufacturing plant in Shenandoah, Iowa. During his career with Pella Corporation, Ned was elected to the Board of Directors for the National Wood Window and Door Manufacturer's Association, Pella Opera House, Pella Area Development Corporation, and Pella Historical Society. He belonged to the Pella Golf & Country Club, enjoyed traveling, sailing, jazz, fishing in Canada, and most of all, family vacations at Lake Okoboji in NW Iowa. Ned passed away December 28, 2019, at The Cottages in Pella at the age of 96 years. He was preceded in death by his wife, Joy Hedrick in 2002; his parents, Arthur and Inez Hedrick; his sister, Eloise and her husband, Bob Houser, his brother, Harold Ellis Hedrick in 2017, and sister-in- law, Margaret (Harold) Hedrick; his parents-in-law, John and Stella (Liter) Hackert, and a brother-in-law, Robert Hackert. Ned is survived by a sister-in-law, Danis (Harold) Hedrick of Pella, his three children, seven grandchildren, and 12 great-grandchildren. They are:
Ned A. Hedrick, Jr. and Watona King of Omaha, NE, Amy and Jeff Graves, Kayla and Alex Hood, Nicole Graves, Phil Hedrick and Mojgan Hoesseini, Andrew Hedrick, Kelsey Hedrick, Shiloh King;
Carol S. Hedrick and Orlan Crawford of Pella, IA;
John E. and Diana (Kaldenberg) Hedrick of Pella, IA, Jennie and Tracy Rozenberg, Sheldon Rozenberg,McKenna Rozenberg, Samantha Hedrick, Sara and Loren Dolan, Erin Dolan, Remington Fields, Dyani Fields, Jayda Ann Hedrick-Dola, Blake Hedrick-Dolan,
Ben and Jordan Hedrick, Maisen Hedrick. Funeral services were held on Friday, January 3, at the Second Reformed Church in Pella. Memorials may be given to Central College or Second Reformed Church. Van Dyk - Duven Funeral Home was in charge of arrangements.
Published on December 31, 2019
To send flowers to the family of Ned Hedrick, please visit Tribute Store.

Send flowers
in memory of Ned

A place to share condolences and memories.
The guestbook expires on March 30, 2020.