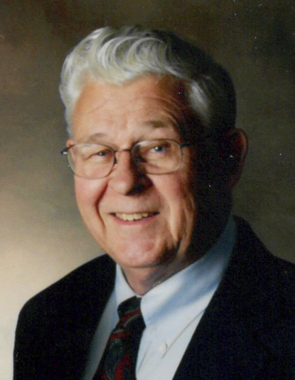 Back to Richard's story

Richard Henry Van Kooten was born on November 19, 1927, near Taintor, Iowa and was taken home to be with his Lord on December 20, 2019, at the age of 92 years while being cared for at the Hospice of Pella Comfort House in Pella, Iowa.
Richard was the second of five children that were born to Henry and Wilma (Vande Kieft) Van Kooten. He graduated from New Sharon High School in New Sharon, Iowa and attended Central College in Pella.
Richard entered the United States Army in 1946 and his second enlistment period ended in 1953 when his younger brother Calvin Van Kooten, who was also in the U.S. Army, was killed.
Richard met Dorothy Jean Dahm at a Christmas caroling party at the Peoria Christian Reformed Church in Peoria, Iowa where they were then united in marriage on August 6, 1954. Together they had six children: Cheryl Jean, Pamela Joy, twins David Ray and Robert Jay, Robert Calvin, and Kathy Lou.
Richard was employed at White Way Auto in Pella and for 33 years was the owner of the Peoria Store in Peoria after his father-in-law, Jacob Dahm retired.
Rich, as he was known, enjoyed studying World War II History and keeping up with current events. He served terms as a Deacon at the Peoria Christian Reformed Church and served on the school board at Peoria Christian School. He later served as an Elder at Calvary Christian Reformed Church in Pella.
He and Dorothy enjoyed traveling to different parts of the United States and to other countries, especially the Netherlands. They have special memories of their family vacations at Horseshoe Lake in Minnesota.
Rich professed Jesus Christ as his Lord and Savior at the Bethel Christian Reformed Church in Oskaloosa, Iowa, was a faithful member of the Peoria Christian Reformed Church in Peoria for many years and at present time was a member of Calvary Christian Reformed Church in Pella. Among his family and friends, Rich showed his love for Christ through unfailing kindness and by never withholding a smile. He always had a joke ready for his store customers, family, and all he came into contact with to cheer up their day.
Rich will be lovingly remembered by his wife, Dorothy and their children, grandchildren, and great-grandson. They are:
Cheryl Hageman of Highlands Ranch, CO, Christopher and Lauren Hageman, Emily Hageman, Jonathan Hageman;
Pam and Rick Boat of Pella, IA, Brandon and Ashley Boat, Brenna and Will Owen, Derek Boat;
David and Irene Van Kooten of Marysville, WA, Andrew Van Kooten, Kayla Van Kooten, Alexander Van Kooten;
Rev. Robert and Jenee Van Kooten of Oak Harbor, WA, Calvin Van Kooten, Taylor Van Kooten, Aaron Van Kooten, Daniel Van Kooten, Nathan Van Kooten;
Kathy Howey of Pella, IA, Ryan Howey, Kyle Howey.
Of his original family Richard is survived by his sister, Joyce Mae (Edd) Star of Pella and a sister-in-law and brother-in-law, Estella (Dahm) and Allen Vis of Edgerton, Minnesota.
He was preceded in death by his twin son, Robert Jay, in infancy; his parents, Henry and Wilma Van Kooten, a sister, Betty Virginia, who died in infancy and his brother, Calvin Paul, his sister, Iris Faye and her husband Gilbert L. Vander Hart, his brother-in-law, Edd Star; along with his parents-in-law, Jacob and Effie (Stursma) Dahm and brother-in-law and sister-in-law: Dr. James and Marlene Dahm.
Memorial services were held on Friday, December 27, at the Calvary Christian Reformed Church in Pella. Memorials may be designated for the Pella Christian Schools or Sovereign Grace OPC, Oak Harbor, Washington. Van Dyk- Duven Funeral Home was in charge of arrangements.
Published on December 27, 2019
To plant a tree in memory of Richard Van Kooten, please visit Tribute Store.

Plant a tree in memory
of Richard

A place to share condolences and memories.
The guestbook expires on March 26, 2020.